Jabitehnan district is the second locality where the Amhara Regional Agricultural Research Institute (ARARI) conducts its farmer’s participatory research (FPR). The district experiences mid-land warm climatic conditions and located at 185 km away from Bahir Dar or 375 km away from Addis Ababa. The altitude in this district ranges between 1303 and 2697 m.a.s.l, and the district is characterized by maximum and minimum monthly temperature of 35 °C and 7 °C. It receives mean annual rainfall of 1023 mm between the months of June and September. The specific FPR sites in Jigga Yelimdar Kebele are situated at altitude of 1800 m.a.s.l.

In Jabitehnan district maize from cereals and pepper from spice crops are the leading crops followed by finger millet, barley. Due to lodging problem teff is not that much favoured by the farmers in the site we visited. ARARI in consultation of local agricultural experts and farmers chosen lowland maize (LL maize) and orange fleshed sweet potato (OFSP) varieties to evaluate their performance using PVS and FPR model (Table 1).

Figure 1. FPR farmers ready for evaluation of improved varieties of crops tested in their locality.

In the district, maize is the main crop and the area is relatively highly productive. On farmers land, the average maize productivity in the district reaches up to 8 tonne per hectare. Anteneh Ketema, a farmer I talked to, told me he owns 3 ha of land out which he dedicates 2 ha of land for maize production every year. The farmers are well adapted to the use of improved maize varieties and agricultural inputs. Farmers receive training on the use of modern agronomic practices from the Office of Agriculture in the nearest farmers training centre (FTC) and PTE centre annually. Until this time, they are using Pioneer maize variety called Limu. This variety is long known with farmers and they were happy with it until recently. Farmers complain unreliable seed supply and when it is available, it is in dearth. According to Yezina Fitihamlak, Solomon Alemayehu and Alene Yibelu, who are experts of Office of Agriculture in the district, seed fraud is the second problem. Some traders pack other seeds and label it as Limu variety and sell it to farmers in premium price reaching up to 3000 ETB per 12.5 kg seed (in current exchange rate it is up to 4400 Euro per 100 kg). Thirdly, Limu is susceptible to gray leaf spot and blight diseases and to African bollworm they said. This and other reasons motivated ARARI to look for other alternative seed sources and varieties.

Figure 2. One of the top performing lowland maize variety is a source of cheer to farmers at Jigga Yelimdar Kebele. 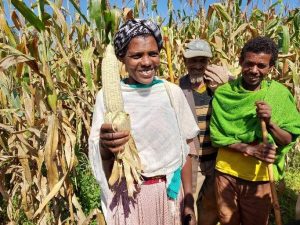 About 30 farmers evaluated the field performance of the four lowland maize varieties (Figure 1) and successfully selected one (which is a new variety to the locality added by ARARI) based on cob size, cob number per plant, disease resistance and overall plant stand. This variety is not affected by gray leaf spot disease but not immune from African bollworm attack. Following this, it is suggested that this variety should be available to farmers beginning from next year preferably through the nearest farmers’ cooperative. Farmers are sceptic on the future availability of seeds of the new variety they selected. Solomon Alemayehu, soil conservation expert, tells past story related with PTE and maize varieties. He says, once an NGO brought and tried BH546 and this variety was liked by the farmers. However, the seed supply could not address the demand. Similarly, there was a Pioneer variety called Damot that was adored by many farmers, but its seed supply was gallingly limited.  To overcome seed supply problem, Andualem Ketema, one of the FPR farmers suggested three points. 1) The introduction of open pollinated maize varieties so that the farmers save seeds from the previous season for the next season planting. 2) The formation of seed producer farmers group who produce seeds by irrigation and distribute for the needy farmers. 3) Support the procurement of maize-based feed processing machines to install and make functional in the feed processing building they already built.

Orange fleshed sweet potato (OFSP) is not known in the area, but the white fleshed sweet potato is omnipresent. Out of the five varieties tested in the FPR, four of them are in a good stand. Since the underground portion of this crop is the economical one, farmers could not comment on the yield and related parameters at this stage of growth.

Discussion with farmers and development agents indicated that there is greater expectation from the project. Maize is a primary crop in Jabitehnan district affected by two main problems: unreliable seed supply and African bollworm. Hence, linking farmers with sustainable seed supply chain need to be addressed during Phase II FPR on top of scaling up the promising varieties selected at Phase I FPR. Secondly, seeking advice from crop protection experts to alleviate the problem of pests in the locality need to receive due attention.

📢📢Please look out for us @innofoodafrica at the New European Bauhaus: beautiful, sustainable, together.👉👉 https://europa.eu/!QQ69tW

We are excited to announce we are joining forces with the leading Finnish innovator in food and dairy, Valio, to bring a future-proof product to dinner tables! 🌱“I cannot imagine a better partner for us than Valio,” states our CEO Simo Ellilä.

South Africa, represented by the University of Pretoria, is one of the key contributors to the InnoFoodAfrica project which aims to make food security a reality across the continent.

📽️ Our partners in #Uganda talk about their exciting work in one of the work packages of the InnoFoodAfrica project which deals with improving farming practices. 👉👉👉
https://youtube.com/watch/…
#H2020 @EU_Commission #FoodSystems #FoodAfrica #Agriculture #FoodSecurity … See MoreSee Less

📽️Our partners in #SouthAfrica talk about their exciting work in one of the work packages of the InnoFoodAfrica project which deals with improving farming practices. 👉👉👉 https://youtube.com/watch/…
#H2020 @EU_Commission #FoodSystems #FoodAfrica #Agriculture #FoodSecurity … See MoreSee Less 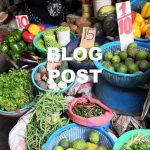 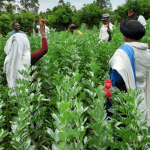