Food consumption surveys were finalized in all the four countries selected to be benefiairies of the innofoodAfrica project. The four countries are Kenya, Uganda, Southafrica and Ethiopia. The survey was done in Ethiopia in two regions Addis ababa and Hawasa region. In Kenya, the survey has been done in kenya and the lower eastern region of the country in Chuka which is 172 kilometers from the capital city. In Uganda, we will work in two cities that is Kampala and Wakiso regions.  Wakiso is a city in the Central Region of Uganda. It is the headquarters of Wakiso District. It is located on the Kampala-Hoima highway, approximately 20 kilometers north-west of Kampala, the capital and largest city of Uganda. In south Africa the selected cities are Freestate and Gauteng. Gauteng is the smallest South African province. It is bordered by the provinces of Limpopo on the north, Mpumalanga on the east, Free State on the south, and North West on the west. In Freestate  agriculture dominates the Free State landscape, with cultivated land covering 32,000 square kilometres, and natural veld and grazing a further 87,000 square kilometres of the province. It is also South Africa’s leader in the production of biofuels, or fuel from agricultural crops, with a number of ethanol plants under construction in the grain-producing western region.

With data entry and cleaning is finalized the team is working on conversion factors and the analyses of the data. It is also working to review existing food-based dietary guidelines. 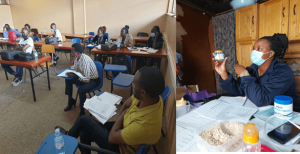 #FoodLAND has established two #FoodHubs in #Tanzania. Several meetings have been held to kick them off and discuss the structure and operating modalities of them.

If you are in #Brussels, come meet us and learn about the @innofoodafrica project: Our food products are on display at the #NewEuropeanBauhaus. More healthy, nutritious food products are under development. Visit our project virtually 👉https://new-european-bauhaus-festival.eu/fair/1MeuzJnblLQNu6WuNZz764
#FoodAfrica #H2020

The #NewEuropeanBauhaus is bringing the #EUGreenDeal into our living spaces💚
The Festival has already started!🎉 – discover how to connect the dots👇
Research, science & technology, education, civil engagement, art & architecture.
Register & follow LIVE  https://new-european-bauhaus-festival.eu/home

Two years ago, we launched our #EUGreenDeal. A new model, which gives back to nature instead of taking away from it.

And at its soul is the New European Bauhaus.

I look forward to opening the Festival of the #NewEuropeanBauhaus later today.

If you are in #Brussels, come meet us and learn about the Innofoodafrica project: Our food products are on display at the #NewEuropeanBauhaus festival. More healthy, nutritious food products are under development. Visit our project virtually here 👉👉👉https://new-european-bauhaus-festival.eu/fair/…
#FoodAfrica #H2020 … See MoreSee Less

The #NewEuropeanBauhaus Festival kicks off today!🎉🚀

Join us online () & across #Brussels to debate and shape a beautiful✨ and #sustainable💚 future together.

Curious to learn about bioplastics for food packaging, nutritious and healthy foods for the urban market based on Africa crops such as cowpeas, fababean, sweet potato, teff, sorghum, and amaranth?
Come and visit our creative and environmentally friendly mobile booth in several locations in Brussels where we are part of the 1st Festival of the #NewEuropeanBauhaus – a 4-day event, held by the @European Commission from 9 to 12 June 2022.
On 9 June, we will be at Place de la Musique, GARE MARITIME (12:00-14:00) and at MONT DES ARTS (16:00-21:00)
On 10 June, our mobile booth will move to PLACE DE BROUCKÈRE (12:00-21:00)
On 11 June, you can find us at MARCHÉ AUX POISSONS (12:00-21:00)
On 12 June, we will return to MONT DES ARTS (12:00-21:00)
We also encourage you to share your page on the NEB Festival platform, now available in the FAIR section (https://new-european-bauhaus-festival.eu/fair/…).
We look forward to your participation in the Festival from 9-12 June 2022. … See MoreSee Less

📢📢 Innofoodafrica exhibiting its work in the #NewEuropeanBauhaus . We are also present in the virtual space of the festival. Look out for us here 👉https://new-european-bauhaus-festival.eu/fair/…
#FoodAfrica #H2020 … See MoreSee Less

📢📢📢We are delighted to be part of the #NewEuropeanBauhaus Look out for us here 👉👉👉https://thefestival.brussels/fair/…
Innofoodafrica research climate-smart crops to provide nutritious food and useful biomaterials for #Africa, the #EU, and beyond. #FoodSystems #FoodSecurity #H2020 … See MoreSee Less 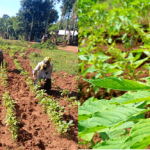 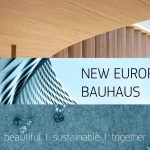 InnoFoodAfrica is exhibiting in the New European Bauhaus FestivalInnofood News