A team of scientists from the University of Helsinki (Henry N. Maina, Frederick L. Stoddard, and Kiflemariam Y. Belachew) traveled to Kenya from 22 May to 01 June 2022. The objectives of the visit were evaluation, experience sharing, and provision of technical support for FPR farmers and InnoFoodAfrica (IFA) Project partner institutions. Here we will give some background information about the project in Kenya and share the key impressive results from the FPR. The IFA project in Kenya is being implemented in two counties: Busia and Tharaka Nithi. Busia is located 454 km away from Nairobi. The annual mean temperature and precipitation of Busia County is between 21 and 23°C and between 760 and 1750 mm. Agriculture employs about 78% of the labor force (https://cgspace.cgiar.org). In Busia County, Matayos sub-county, Bukhayo West and Busibwabo wards Amaranth FPR by Chuka University (CHU), and orange-fleshed sweet potato (OFSP) FPR by Africa Harvest Biotech Foundation International (AHBFI) are being carried out. During the visit, the FPR is in its third phase. In Busia maize, cassava, common bean, and sorghum are the main crops. 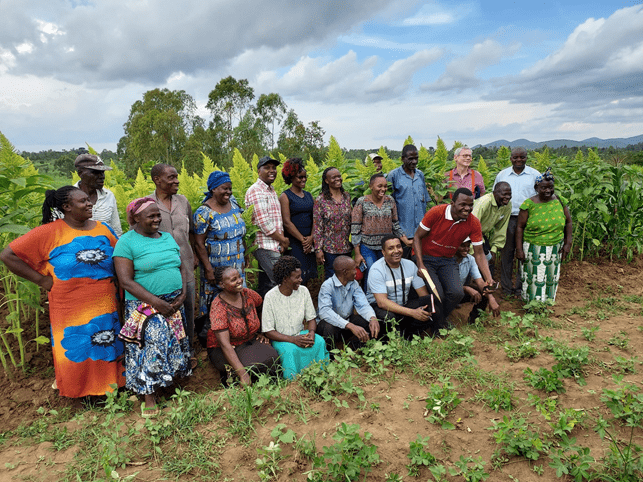 Tharaka-Nithi County is located 171 km away from Nairobi. About 80% of the population is engaged in agriculture. The average annual temperature is 25 °C. The county receives an average annual rainfall of 717 mm. In Tharaka-Nithi County, Chuka sub-county, Magumoni, Mugwe, and Karingani wards cowpea FPR by CHU, and finger millet FPR by AHBFI are being carried out. In this County, banana (both cooking and dessert types), cassava, maize, common bean, cowpea, sweet potato, and yam are the main staple crops.

Amaranth FPR was conducted by CHU. In this area, improved Amaranth varieties and the use of modern agronomic practices for this crop were first introduced by the IFA project. However, local low-yielding Amaranth landraces exist in the County. Amaranth varieties under FPR include Terere Smart (white), Terere Hybridus (brown), Katumani Gold (golden), and Dubious (black). Variety Terere Hybridus is resistant to bird attack due to the thorny spikes that make it difficult for birds to feed on it, but it is late maturing and difficult to thresh. On the contrary, Katumani Gold is susceptible to birds and lodging but is an early maturing. Because of shortcomings, these two varieties are not welcome by farmers. In Busia County farmers favored Terrere Smart owing to its big heads, delicious taste, and lodging resistance, and Dubious variety due to its high vegetable value and drought tolerance. Locals believe that improved Amaranth varieties are easy to manage as compared to the landraces.

Figure 2. Terrere Smart (A), the four Amaranth varieties tested in the FPR (B), grain balls made from Amaranth by Widows Alung’oli women group, in Busibwabo ward, Busia County.

The leaf and grain of Amaranth are edible. During the vegetative stage of plant development, young leaves are collected, cooked, and consumed as vegetables. At maturity, the grain is harvested, grounded, and mixed with other cereals (e.g., sorghum or maize) and used for porridge making. Dubious was chosen by farmers owing to its large vegetative biomass, hence a good source of vegetables. A farmer called Amos Magero grows Dubious for its leafy vegetable value and enhanced drought tolerance. During our visit, he dedicated about 0.2 hectares of land for the production of this Amaranth variety. Farmers also understand the nutritional value of Amaranth and a woman farmer called Beatrice Okumu indicated that the vegetable and the grain improve milk production in lactating mothers and a cup of Amaranth is healthy feeding. As a result, her 8 months baby looks stronger than its age. Amaranth leaf is also touted as an easily digestible vegetable. In the future, farmers plan to connect to the outside market through Syngenta Foundation to use Amaranth as nutritious food processing raw material. Nanak Bujibi Women Group also plans to produce more grain and introduce it to the market.

The cowpea FPR is a success story in Tharaka-Nithi County. Among the four cowpea varieties (Ken Kunde, K80, M66, and KVU 271) which were tested, Ken Kunde and M66 are widely accepted by the farmers. Out of the two, Ken Kunde is mentioned as the best one for both vegetable and grain production. Farmers described Ken Kunde as high yielding, early maturing, and drought tolerant, and delicious in taste. Ken Kunde grows well

in marginal lands as compared to other varieties. It cooks well in less time. Cowpea grain is mashed with potato and banana. Cowpea is used to prepare the second popular local food (next to Ugali) called Githeri, a food made from a mix of beans with boiled maize.

Before the FPR, farmers used to buy cowpea from the market for consumption. The new varieties introduced by IFA are high yielding and thus now the farmers are dedicated to producing cowpea both for home consumption and for the market. Pastor Benson Mbaka, a progressive farmer in Karingani Ward, manages two cowpea plots; one as part of the FPR team, the second one on his own. He also uses sprinkler irrigation to supplement his fields during moisture stress. As per our observation, in fields where cowpea and common bean are cropped in juxtapose, cowpea is doing well owing to its enhanced drought tolerance in the fields.

Generally, for the sustainability of Amaranth and cowpea production in the Counties and beyond, problems of improved variety seeds and markets for surplus production should be sought. As part of this, CHU and AHBFI have provided training on seed production and the safe use of agrochemicals. Production of pure seeds will continue by the farmers themselves and the farmers have plans to produce extra seeds for other needy farmers as well. Owing to their drought tolerance, early maturity, high yielding ability, and delicious taste, and other culinary qualities, these crop varieties have a future in the drought-prone areas of Kenya as potential nominees of climate-smart agriculture.

Special thanks for the people charted in the table for their effort and hospitability in making our visit real and productive.

2023 has been designated the #YearofMillets by the United Nations
Among different millets species, the Innofoodafrica #EU #H2020 project puts the focus on #EleusineCoracana known as #FingerMillet. We will pursue our research in 2023 on the #FingerMillet crop and also on the post-harvest sidestream. Rather than disposing of the sidestreams, VTT Technical Research Centre of Finland, University of Pretoria, Nofima, and Puratos Group give them a new life for food packaging applications! … See MoreSee Less

📢BLOG: DIETARY INFORMATION PROMOTES GOOD NUTRITION: Dietary counseling improves mothers’ knowledge about different food groups and different methods of mixing these food groups to ensure healthy diets. The application of the photographic food atlas as an additional reference and teaching material in dietary counseling of women of reproductive age was thought to be advantageous in several ways. Read more here 👇 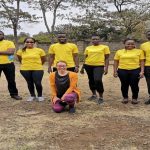 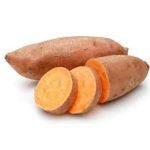