A team of scientists from University of Helsinki comprising Frederick L. Stoddard, Ndegwa H. Maina and Kiflemariam Y. Belachew travelled to Ethiopia between 13 and 20 September 2022. The objective of the visit were: 1. Conduct a physical visit on InnoFoodAfrica WP3 project activities run by the Amahara Regional Agricultural Research Institute (ARARI) in Banja and Jabitehnan Districts of the Amhara Region, Ethiopia; 2. Discuss with the team of ARARI and the farmers’ participatory research (FPR) group about the outcomes, potentials, and constraints of the project activities and the future implementation plan of the introduced new crop varieties and agronomic practices beyond the project period.

Table 1. FPR crops in the pre-scaling up process in the 2022 cropping season in the two districts

*indicates the initial demonstration included local varieties as well. **this year mid-land maize was not sown for pre-calling up due to lack of seed supply. ***OFSP is orange-fleshed sweet potato.

The pre-scaling up fields of faba bean, highland maize and teff in Banja district are in good conditions. The fields are maintained neatly. The crops were established after the application of lime and the fields look healthy and did not suffer from the effect of low pH. The purpose of the pre-scaling up work is two-fold. In one hand, large-scale multiplication of selected varieties so that large number of farmers get access to seeds in the next phase. The second one is to demonstrate further the performance of selected varieties when grown in bigger plots.

Figure 1. Pre-scaling up fields of faba bean, teff, and maize in Banja district

The FPR farmers in the two districts are working in great zeal as they are contented with the new varieties and the agronomic practices, which demonstrated greater yield and acceptable quality. The farmers believe that their locality is blessed with good weather conditions and fertile soil that can produce better with appropriate management. The farmers in the Jabitehnan district are beneficiaries of the irrigation system installed by the government. On the other hand, farmers in Banja district reports that they have a perennial river flowing across their villages throughout the year. Nevertheless, due to the topography of the land, they are not in a position to use the river water for irrigation. Moreover, they are worried about the high fertilizer and lime prices, the inconsistent supply of improved seeds and lime, and the unpredictable occurrence of frost during crop filling sometime in November. Farmers from Jabitehnan district share problems associated with the issue of seed and fertilizer supply. Apart from these, farmers in Jabitehnan district have raised marketing problem related with maize and OFSP.

Figure 2. Discussions with farmers in the field

Inconsistent seed and lime supply, and higher prices of fertilizers are the common problems affecting agricultural productivity in the area in particular and in the region in general. Problems of seed supply chain starts from the production field. Lack and price fluctuation of lime supply is a manmade problem resulting from lack of maintenance of machines in the production site.

Soil acidity and frost in Banja district are the two important abiotic stresses affecting productivity of crops in the area. Application of lime in the short run and development of acid soil tolerant cultivars in the end are the outstanding methods of dealing with soil acidity. InnoFoodAfrica WP3 scientists are currently conducting field experiment on acid soil tolerance in faba bean. Problem of frost minimised by early sowing or avoided by growing of crops the use of irrigation water during frost-free seasons. During dry periods, winter and spring (December to May), crop production can be maximized by the use of irrigation water. Hence, with appropriate support to farmers to make use of the perennial river flowing across their village, there is a possibility of harvesting of 2 to 3 crops per annum in Banja district.

Field days and showcasing products (raw and cooked/or processed food) for farmers, consumers, wholesalers and agro-processors in different setting will solve problems of marketing. For example, linking of maize farmers as an out growers of processing industries engaged with maize flour/starch and oil producers is one of the important aspects of marketing to exploit.

Introducing the concept of integrated soil fertility management will have significant impact in reducing farmers’ dependency on synthetic fertilizers while maximizing productivity in environmentally friendly way.

Closely communicating and working with other projects active in the region for common development goals for example with AgroBIG project is encouraged.

📢#Foodsystems in #Africa and the #Mediterranean
How to co-construct solutions for sustainable food security and health? November 7,8 and 9, 2022 Montpellier, France.
Valerie Lullien of INRAE will present InnoFoodAfrica on Tuesday
Register here 👉👉👉 … See MoreSee Less 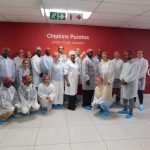 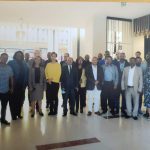